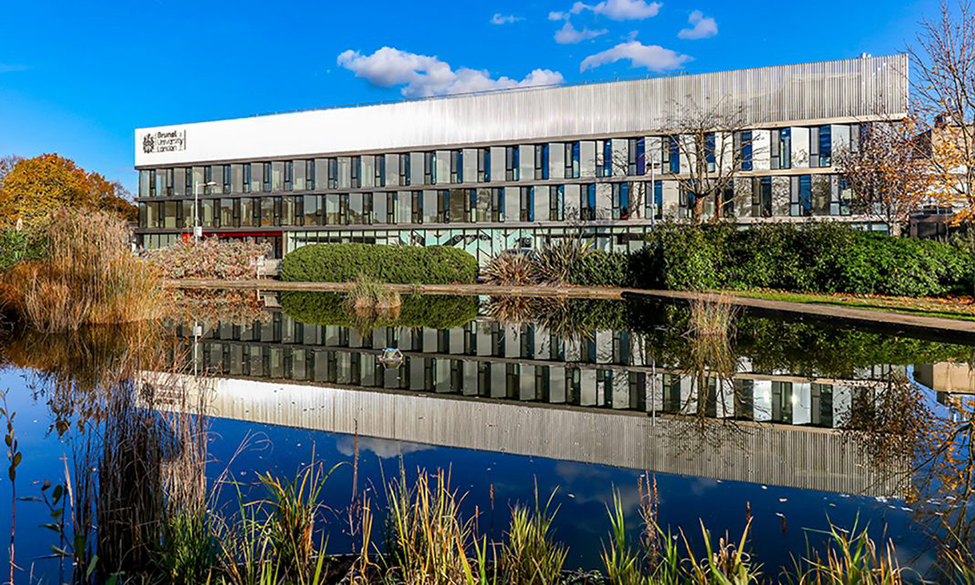 Kawneer Glazing Systems Help With A Hat-Trick At Brunel

Kawneer’s AA100 curtain wall, AA540 vents, and series 190 and AA720 doors were specified by the regular Kawneer users for the latest redevelopment of the Wilfred Brown Building at the university in Greater London.

Sheppard Robson had been working with Brunel since first master planning the campus in the early 1960s, designing the Wilfred Brown Building in 1968, and then adding a rooftop extension to the structure in the 1990s.

This latest revisiting creates a new identity for the recently formed College of Engineering, Design and Physical Sciences and comprises the £13.8 million external and internal transformation of the 4,710m2 building to create a new gateway at the western boundary of the university.

The building was originally designed to accommodate university administration facilities and as such was previously heavily cellularised, with a double row of central columns. It abuts, but previously did not engage with, the adjacent Michael Sterling building to the east and unsuccessfully linked to the adjacent double-height council chamber via a single-storey circulation link, previously cut off from the ground floor by a small courtyard space.

Sheppard Robson Associate Neil Price said: “We specified Kawneer’s curtain wall as a simple and elegant response to renewing the Wilfred Brown Building.  It forms most of the building envelope and the sawtooth façade arrangement to the west elevation in particular was key to achieving the architectural vision for the project. They were fundamental in achieving both the environmental performance and architectural vision for the project.”

He added: “The glazed elements and their sawtooth arrangement to the west elevation are key to the architectural language of the Wilfred Brown Building, enabling the existing 1960s structure to be adapted and reused, whilst creating a distinct and modern identity for the scheme.”

As part of the university’s Transformational Project (TxP) programme, and supported by the successful award of capital funding from the Higher Education Funding Council for England (HEFCE), Wilfred Brown has now been reinvented to create a new ‘front door’ for the college.

Internally, the ground floor has been opened up and a new double-height atrium constructed to the north, infilling an existing, underused courtyard and connecting the buildings to create a STEM learning centre.

Three storeys of modern, open-plan academic workspace are housed on the upper floors to support progressive ways of working for students and 141 members of staff, ranging from academics and lecturers to heads of department. At third floor, a large open-plan PhD research office is provided alongside communal staff facilities.

Formerly housing the university’s senior leadership team, department of estates and facilities management services, the Wilfred Brown Building has been reinvented as a modern, vibrant, student-focused teaching and learning facility.

Initial appraisal of the existing building, alongside interrogation of the university’s aspirations for the project, quickly established the need to replace the previous envelope with a modern façade system.

Crucial to this decision was the need to significantly upgrade the performance of the external fabric, coupled with the aspiration to deliver a ‘world class’ gateway building, marking the establishment of a new college and the strategic objective to enhance provision of STEM outreach facilities.

The facade strategy was conceived as an environmentally driven design response to the building’s orientation and its influence on the required performance of the façade. The completed facade achieves a significant improvement in performance through the enhanced thermal properties of the envelope, exceeding current air tightness requirements, improving the efficiency of the building services installation, and addressing solar energy transmittance through the installation of high performance glazing in response to site conditions.

Alongside the wider sustainability strategy, enhancement of the envelope contributes to an improvement of 31.8% over Building Regulations Part L requirements, while the improvement over a baseline case representing the existing building is estimated to be 49.7%.

In addition to retaining the existing structure, several further environmental measures were employed to harness renewable energy sources. The south elevation complements the roof-mounted PV array with two storeys of clear BIPV glazing in the Kawneer curtain wall, generating clean electricity for use within the building, whilst the demonstration plant room at ground floor houses both a biomass boiler and a ground source heat pump – using a reversible pump to harness groundbourne temperatures for use in heating or cooling the building. The ground source heat pump includes an additional borehole for academic research and where possible, passive design strategies (including natural ventilation) have been used throughout. 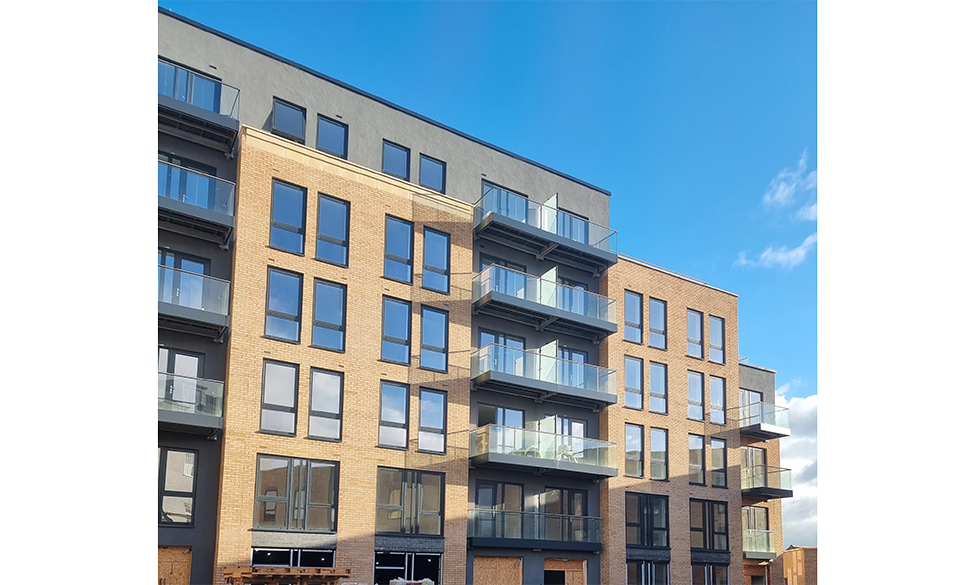 History In The Making

TuffX has supplied 60m2 of specialist toughened glass for a large property development project at an historic site in Bristol. The Carriageworks, at the heart of Bristol’s vibrant Stokes Croft neighbourhood, has been converted into 145 one-, two- and three-bedroom...

END_OF_DOCUMENT_TOKEN_TO_BE_REPLACED 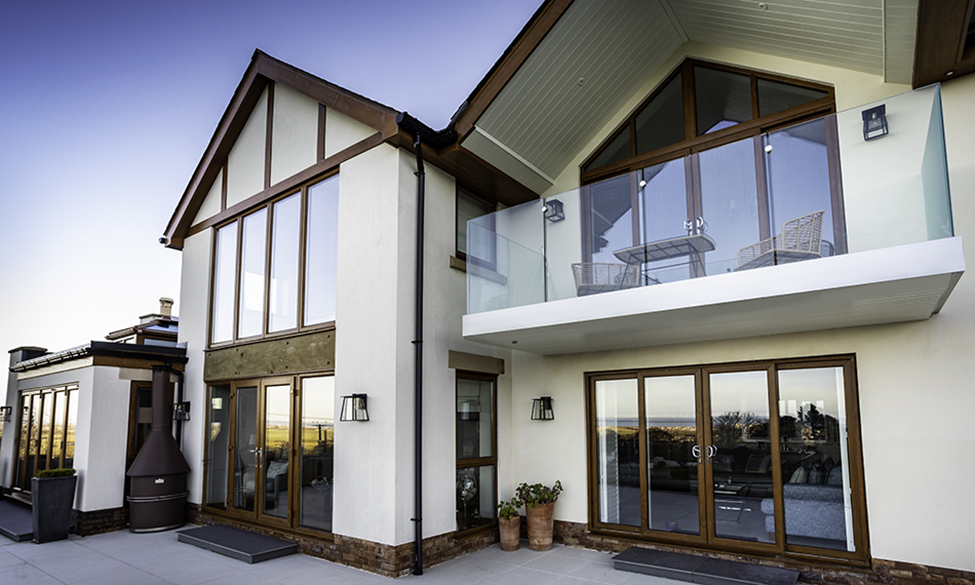 Optima and PatioMaster products from Epwin Window Systems have been fitted in a six-week installation project as part of a complete refurbishment and upgrade of an individually-designed detached home in Conwy, Wales. The high-end domestic project, undertaken by L...

END_OF_DOCUMENT_TOKEN_TO_BE_REPLACED 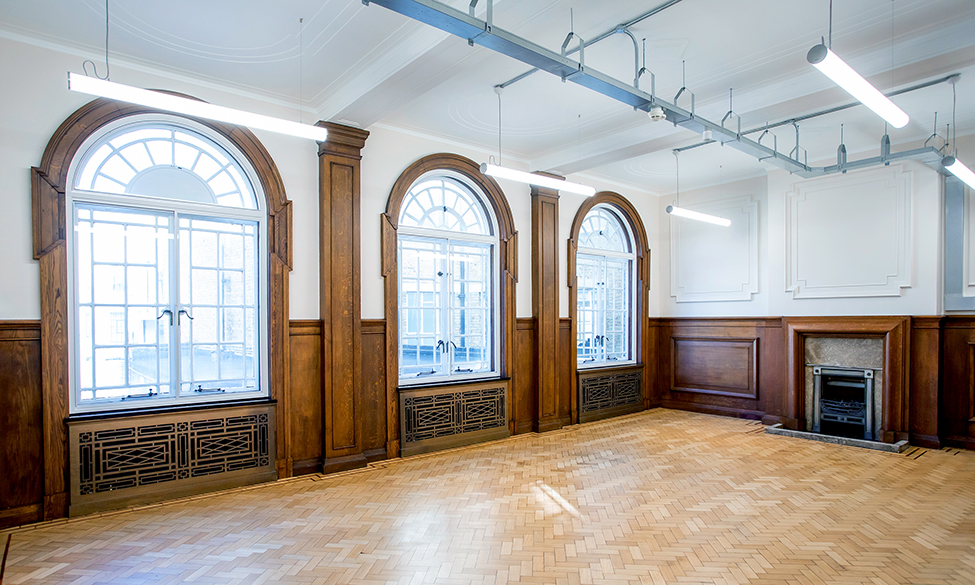 Derelict market buildings in the Conservation Area of Smithfield, central London have been converted to create a warmer, quieter and more secure environment to house the new Museum of London. The museum, formerly at 150 London Wall in east London, has moved to West...

END_OF_DOCUMENT_TOKEN_TO_BE_REPLACED 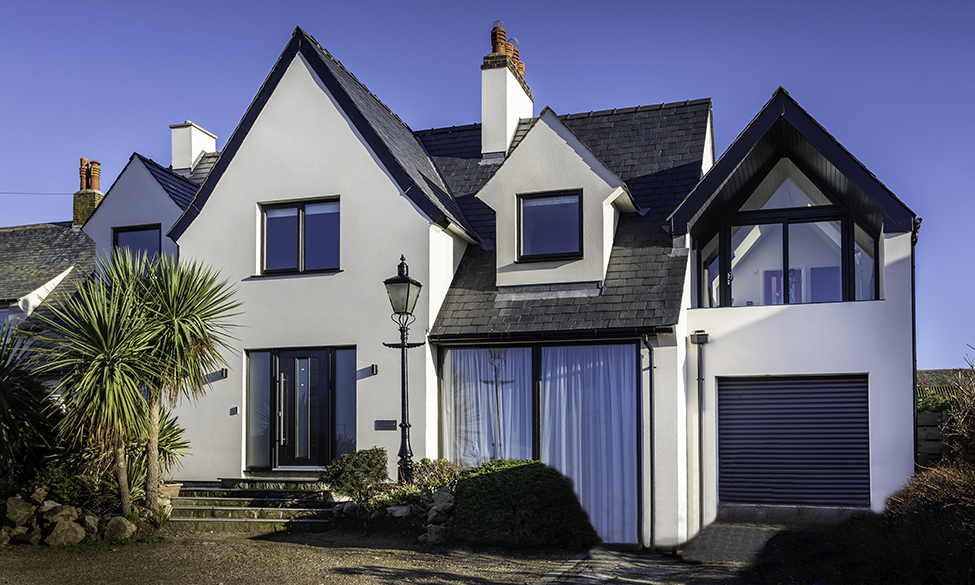 Epwin Window Systems ‘fast-fitting’ products have helped to transform a stunning arts-and-crafts-style detached house in Conwy, Wales as part of an extensive property refurbishment. The project was undertaken by local installer L Pearce Home Improvements and was...

END_OF_DOCUMENT_TOKEN_TO_BE_REPLACED 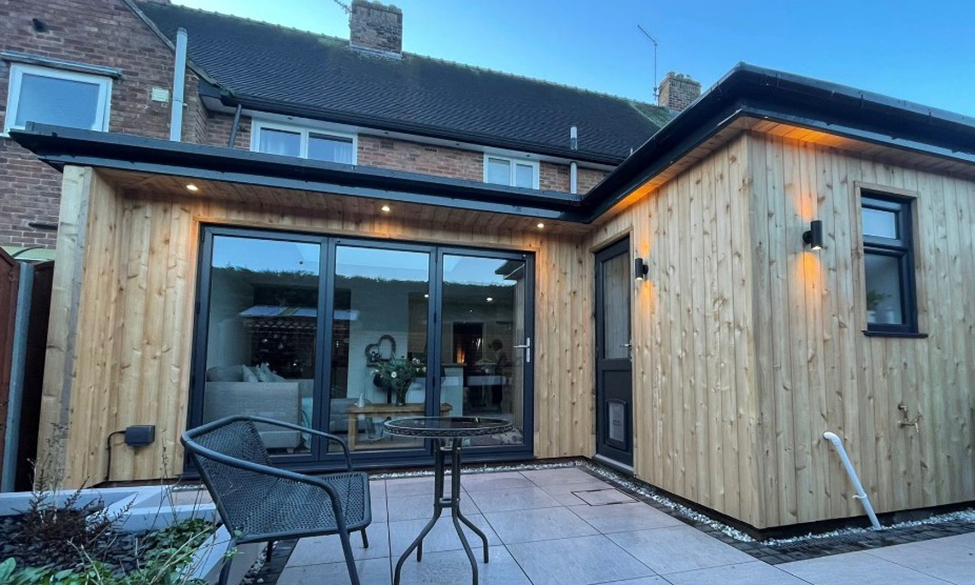 Epwin Window Systems says the company is synonymous with offering the industry’s largest range of award-winning window and door systems in a choice of product materials. The depth and breadth of their product offer has proved popular with installers who have...

END_OF_DOCUMENT_TOKEN_TO_BE_REPLACED 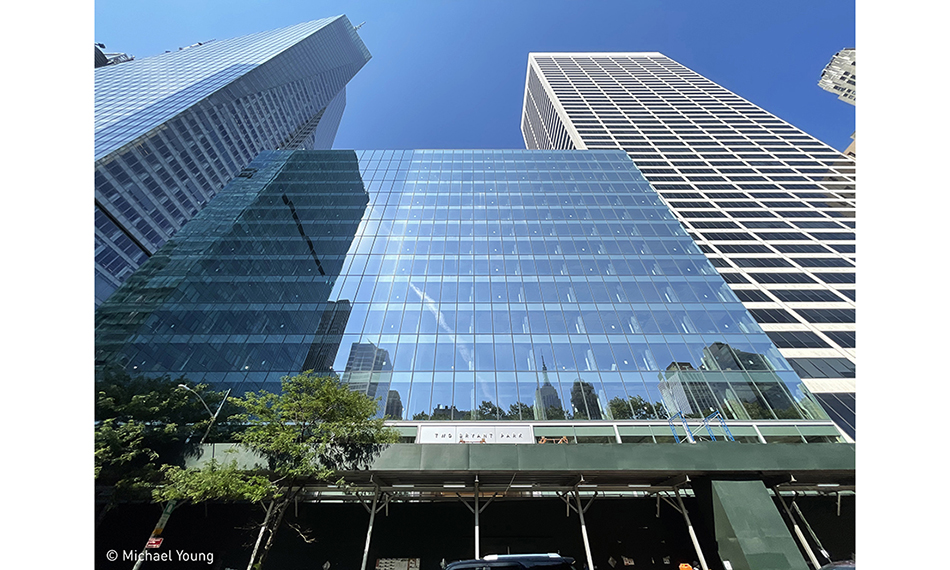 High-performance Super Spacer T-Spacer SG from Edgetech has helped revitalise three historic features of the New York skyline. 660 Fifth Avenue, Two Bryant Park and the Summit at One Vanderbilt have all undergone extensive refurbishment work involving the use of...

END_OF_DOCUMENT_TOKEN_TO_BE_REPLACED

Bespoke architectural and structural glazing business Nüevo Home has carried out a £40K curtain wall installation at Kensington Primary Academy, transforming the building and improving its ventilation. Catering for over 200 pupils, the Academy was previously fitted...

END_OF_DOCUMENT_TOKEN_TO_BE_REPLACED 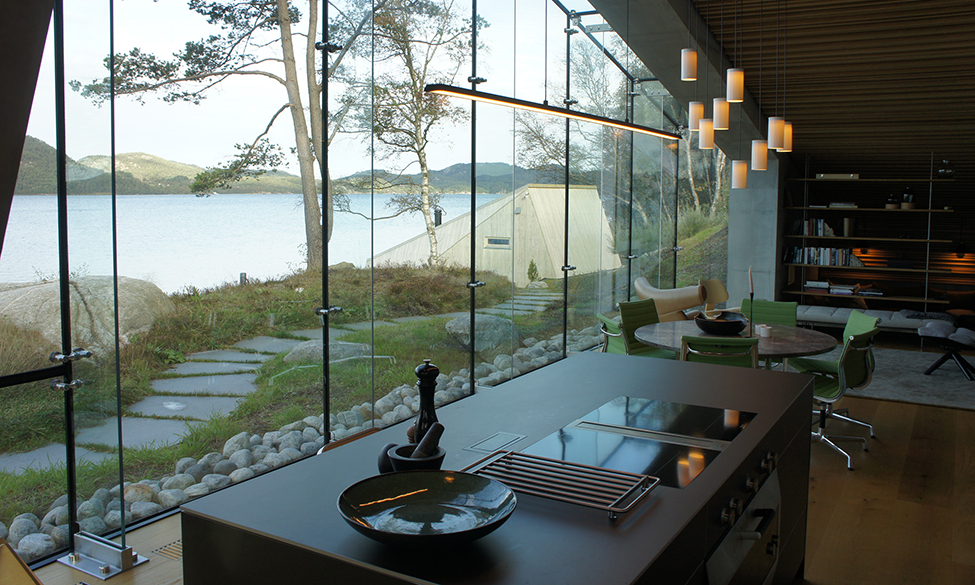 Everyone loves a room with a view, and they don’t come much more striking than an uninterrupted vista of a fjord. So, when the owner of Summer House was discussing designs for the building with their architect, maximising sight lines to make the most of its...

END_OF_DOCUMENT_TOKEN_TO_BE_REPLACED 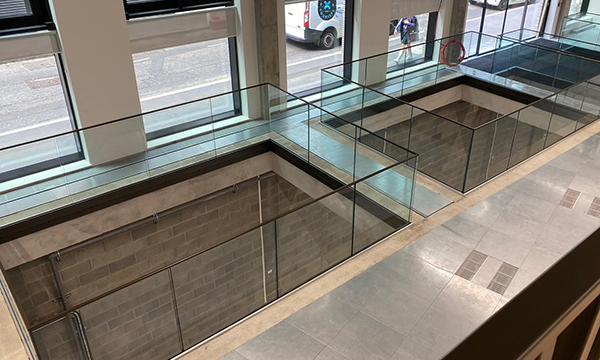 A refurbished office in central London has been given the TuffX treatment, transforming it into a stunning contemporary workplace flooded with natural light and space. Multiple large openings on the office building’s ground floor were designed to open up the...

END_OF_DOCUMENT_TOKEN_TO_BE_REPLACED 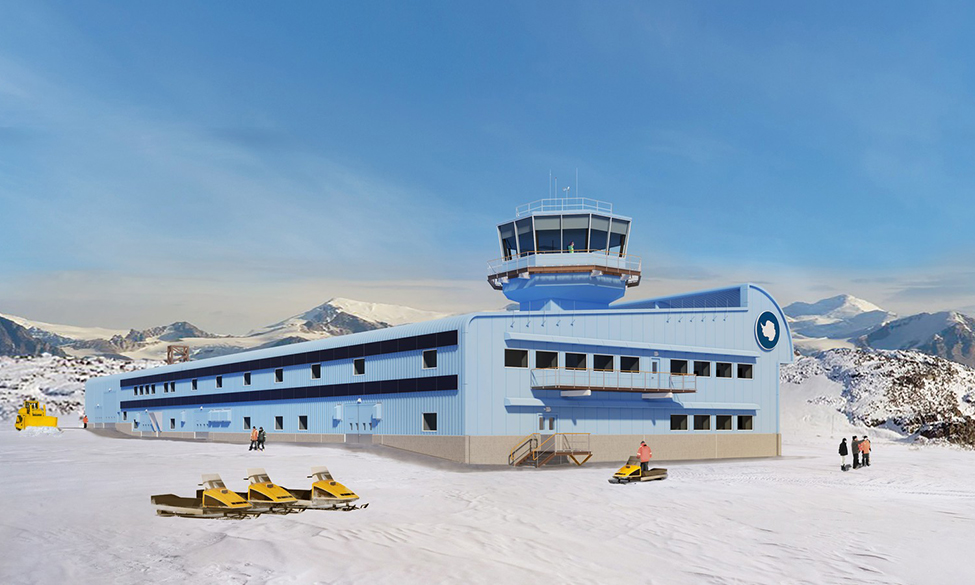 Image Above: CGI of the Discovery Building image courtesy of British Antarctic Survey/BAM Nuttall   By Wojciech Brozyna - MD of Aluprof UK With just a population of 2,000, Antarctica is the coldest, driest and windiest continent on earth, so why would you wish...